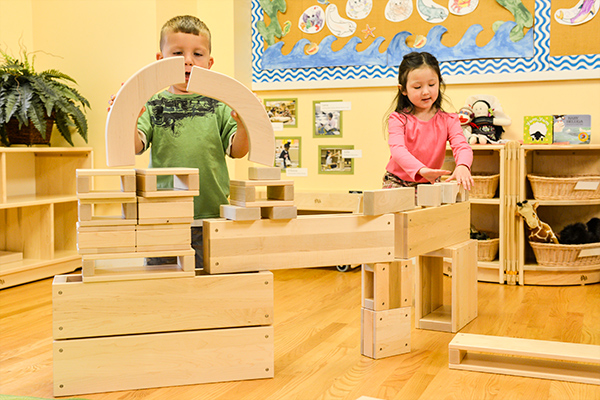 We all know that block play is good for children, but here’s part of an email we received from Vikki Curtis in Wales which portrays just how powerful constructive play can be.

“When Osian started nursery at 3 years old, his use and understanding of language was very good. He also had excellent understanding of social language cues and non-verbal communication and extensive vocabulary, but he made most of his sounds at the front of his mouth. Osian quickly realised that he couldn’t be understood all of the time and as a result developed an anxiety stammer.

Osian was referred for speech and language therapy. By this point he was stammering most of the time and started “giving up” in the middle of sentences. His therapist worked with him to find ways to help his talk and had advice for me as his parent. We tried all of the strategies… but the most successful one was almost an accident!

Playing with blocks has always been one of Osian’s favourite activities. He loves to envelop and disconnect things, and blocks provide the opportunity to do both.  He would play for extended periods of time, building structures, hiding toys inside and then knocking them all down! Eventually, we noticed something…

Osian didn’t stammer when he was playing with blocks. He would talk to himself – fluently. No stammer. At all. Blocks gave him the opportunity to lose himself so completely in the play that anxiety disappeared. He also had plenty of opportunities to rehearse what he wanted to say. He realised that he was speaking without a stammer and used this new found confidence to talk in other situations.

Osian has now been discharged from speech and language therapy. He no longer stammers – but he does still play with the blocks!”

Read more about the many ways that block play supports learning and development.