Oral language: the foundation of literacy 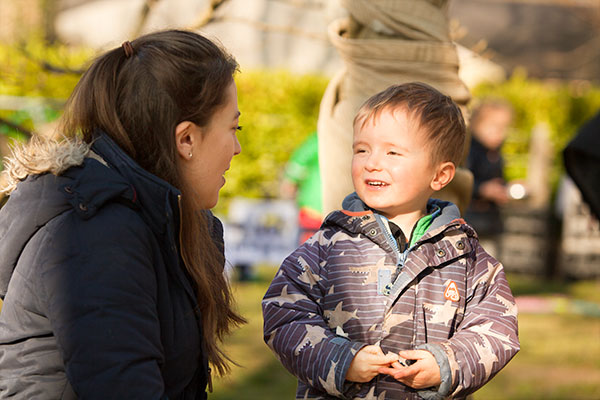 In the history of human development, oral language—conversation, poetry, story-telling, and song—arose long before written language. In children we see the same pattern of language development. Children first learn to listen, to speak, to sing, to enjoy rhymes, stories, and books before they can read or write. What we often forget is that this foundation in oral language is a critical step in developing literacy.

Professor Barry Sanders, well known for his book, A Is for Ox—a title which refers to the Phoenician system of using pictures for sounds—describes eloquently the importance of the oral language development. In summary, he says: “A person’s success in orality determines whether he or she will ‘take’ to literacy.”

Given this importance of developing good oral language, how can parents, teachers, and caregivers support a child’s success in developing it?

One of the key times when children develop language is during their free play. In play children make use of everything they know. As psychologist Lev Vygotsky expressed so beautifully, children “stand a head taller” when they are at play. This includes their use of language. In play they feel free to try out new words and ways of speaking. Sarah Smilansky, a noted researcher of children’s play, compared kindergarten children who were strong in socio-dramatic play with those who were weaker in it. The stronger ones showed stronger abilities in speaking as well as in understanding others. 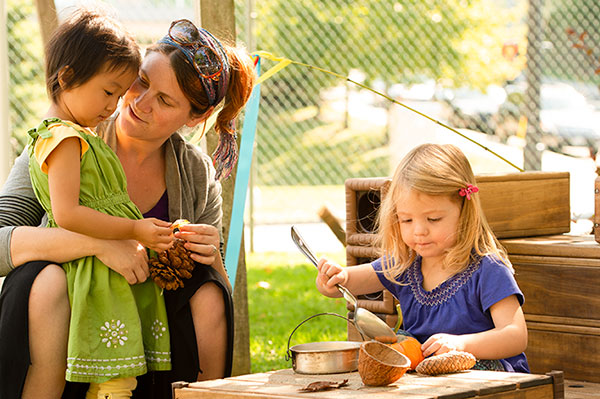 Fortunately, children are highly motivated to learn language from a young age. There are various theories about how they learn language, but anyone working with children sees clearly that most children are strongly attuned to language and devour it eagerly. When that’s not the case, there is often cause for concern. This does not mean that all children begin saying “Mama” by age one, or speak two word sentences by two and more complex ones by three. My own mother often commented that I said very little until I was three. When she asked the pediatrician about this he remarked that he was confident I would soon begin speaking and never stop. According to my mother, that is just what happened!

Infants and toddlers are deeply interested in language. Most parents instinctively understand this and surround their infants with warm, loving language. Often called motherese or parentese, language directed to infants and toddlers tends to be higher pitched, more musical, and slower than language addressed to older children or adults. It doesn’t need to be exaggerated and made ultra-sweet as it sometimes is, but musical enough for infants to bask in its warmth. It’s related to the whole field of lullabies and nursery rhymes which infants and toddlers also love.

Recent research affirms the importance of nursery rhymes for young children, finding that they contribute to phonemic awareness—the recognition of sounds and the breakdown of language into sound units or syllables. Such awareness is an important component of learning to write and read. Even before they can speak, young children indicate their attunement to nursery rhymes. I recall doing “This little piggy went to market” with a neighbor’s nine-month-old. She was in her stroller with bare feet on a hot summer’s day. As soon as I finished she lifted her foot with a clear message: Do it again. I did it several times before she was satisfied. I’ve had similar experiences with many children who were not yet speaking clear words but were intrigued by the rhymes, rhythm, and gestures of nursery rhymes.

The oft-cited research of Risley and Hart found that, by age three, children in low-income homes heard 30 million words less than children from more affluent homes. This is a lag that needs to be addressed. Exposure to good oral language—conversation, rhymes, songs, and stories—helps a great deal. For additional suggestions on how to overcome the word gap, see NAEYC’s “The Word Gap: The early years make the difference.” [http://www.naeyc.org/tyc/article/the-word-gap]

As a preschool/kindergarten teacher I focused on oral language at different times throughout the morning. I did not like to drown children in words but at snack and meal times I might tell a little story from my life and the children responded with stories of their family, pets, trips, and the like. We learned how to engage in the art of conversation, and this meant listening to each other as well as speaking.

We used rhymes and songs in transition times to weave the parts of our day together. Some rhymes were said each day at the beginning of circle time. These varied over time so that the children learned many in the course of the year. They were a wonderful way to gather the children’s attention for the seasonal circles that followed. Sometimes we acted the nursery rhymes out as in “Jack be nimble, Jack be quick, Jack jump over the candle stick.” The children formed a line and merrily took turns jumping over the candle stick at the right moment.

Sometimes I heard children discussing a nursery rhyme, as we might discuss a piece of literature. On one memorable day, four-year-old Adam spoke to a friend about Humpty Dumpty. “I don’t think Humpty Dumpty fell,” said Adam. “You don’t?” replied his friend, in a tone implying a great heresy had been spoken. “No, I think he jumped!” Adam was certainly a child who jumped into life, undaunted by the many difficulties he faced. He was not an easy child to work with but one I treasured for his fierce spirit.

Fairy tales were also a regular part of our school day. Just as one wants teens to have a solid background in the world’s great literature, I wanted my young children to be well versed in the tales that have been part of children’s culture for centuries. Great stories enrich feelings, stimulate the imagination, and help shape our outlook in life. For young children fairy tales affirm that, yes, there are difficulties in life but we have the courage, strength, and steadfastness to meet them. And while our strength alone may not be enough, there are wonderful beings who come to our aid—kindly dwarves and animals, wise old men and women, and children themselves. The world of fairy tales is full of wonderful beings as well as evil ones. They strengthen the child’s inner confidence that while terrible things sometimes happen, life is nevertheless good.

Today’s children are heavily immersed in the characters of television and other screens. Whether they derive the same nourishment from them—or merely experience their captivating entertainment—remains to be seen, but I am skeptical. I have never seen any modern programming that rivals the depth and richness of fairy tales, told simply and well, which children absorb deeply.

I generally taught mixed age classes of three to six-year-olds and enjoyed the different responses of the age groups to fairy tales. The preschoolers usually sat with mouths open and their little feet might shuffle on the rug. One felt them drinking the stories in, all the way to their toes, much like an infant drinks its mother’s milk and wiggles its toes. Oh, those stories tasted so good!

The kindergarten children listen with mouths closed and one can practically see the images of the stories flit across their minds’ eye. The door to image making—imagination—has opened for them and they can see the stories. Many go home and tell the stories after hearing them a few times.

For preschoolers, the difficulties of the tales are mild as in the Billy Goats Gruff, Goldilocks, or the Gingerbread Man. In such tales there is a repeating sequence of events and the rhythm of the story helps capture the children’s attention. There are tales in which creatures come to live together as in The Mitten, and there are tales in which the abundance of life overcomes poverty as in Sweet Porridge. I remember telling this tale to a group of children who were homeless. They sat up at attention at the line, “One day there was no food left in the house to eat.” They knew this situation intimately and seemed especially satisfied by the little pot that always filled itself with sweet porridge “as if it wanted to feed the whole world.”

Kindergarten children are ready for stronger tales in which some evil rears its head but courage and goodness are victorious. Little Red Riding Hood is a good example, but there is no need to dramatize it. The wolf is scary enough as it is for young children, and the line, “And then he swallowed the Grandmother whole” can be said in a calm and quiet way. This age group loves Sleeping Beauty, The Frog Prince, Hansel and Gretel, and dozens of others drawn from cultures around the world.

In my mixed-age classes I varied the tales, telling a simple tale repeatedly for about a week and the more complex stories for two weeks. The older children saw the humor in the little tales and were not bored by them, and the young children drank in what they could from the more complex tales, content in the presence of their older classmates who absorbed the stories deeply.

There is yet another level of complexity and strength of evil in tales that are better saved for first grade such as the Norwegian tale, East of the Sun and West of the Moon. For some years I volunteered at an inner city school and did painting and story telling with the first graders once a week. One day the teacher told me she had had a parent evening and the parents wanted to know what happened on Mondays. Their children came home from school, gathered up their siblings and cousins, sat them down and said, “Now I’m going to tell you a quiet story.” They would then tell the fairy tale they had heard that day.

I was deeply impressed, for fairy tale language is complex and the stories I told were not simple. Yet these first graders from very low income families were repeating the tales after a single hearing. What a wonderful way to overcome the language gap and develop oral language skills, and at the same time be strengthened by tales with great meaning.

Joan Almon was a Waldorf early childhood educator for nearly thirty years and then co-founded the Alliance for Childhood to advocate for the needs of all children. She frequently writes and lectures on the importance of play in early education and throughout childhood (in the USA).