“The grand show is eternal. It is always sunrise somewhere, the dew is never dried all at once, a shower is forever falling.Vapour is ever rising. Eternal sunrise, eternal dawn and gloaming, on sea and continents and islands, each in its turn, as the round earth rolls.” – John Muir

Children have a natural understanding of the world around them and therefore have a fascination with all aspects of it. From an early age, children are explorers and they have enquiring minds that lead them to ask the most fundamental and yet thought-provoking questions. One of the perennial discussions for the adults, is around how far the inquiry guided by their questions can go, and how tangible the experience can be (Warden 2010).

One challenge we face is that some of the questions children ask are linked to unobservable phenomena such as death, decay and disappearance. It is these aspects of connection to the natural world that are often the least well-defined, but they can be the ones that fascinate children.

In my work, Nature Pedagogy is defined as the art of being with the natural world inside, outside and beyond (Warden 2018). One interpretation of this art of being is the internal dialogue: the unobservable aspects of the relationship that connects us all with the natural world. In many cultures around the world there are behavioural codes that weave respect for the land through all their work. For some, nature is central to their lives and also to their spirituality, for others it is viewed as something to be used simply as a resource.

Ancient connections to the land brought great understanding of relationships and the interconnectedness of humans and their impact on the planet. The onset of commercialism and a changing lifestyle, where humans have become indoor dwellers, has created a distance from nature and the rhythms within it. Many children are removed from the experience of death, in an adult attempt to protect them from it while they are “so young”. In our experience however, the natural world provides moments to explore the cycle of life of other living things. A case study of this is detailed below. Nature can be harsh and unyielding as well as calm and beautiful. Exploring issues such as death, decay, disappearance and miracles of birth and survival is important and can be further discussed with adults as the imponderables of life. 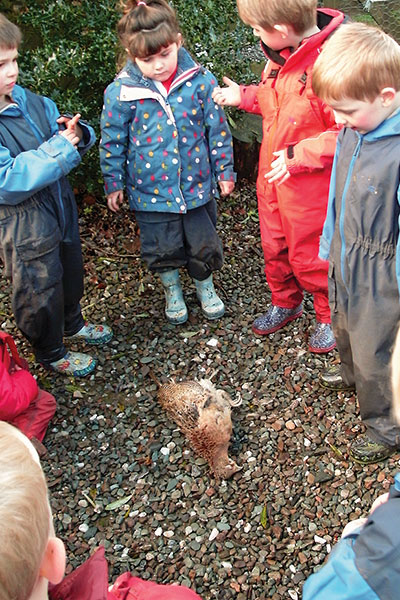 Children arrived at the centre one morning and found a dead pheasant outside on the road. They were keen to take a closer look, and a discussion ensued between the 2-to 4-year-old children as to the cause of death:

“It’s ‘cause something came to kill it, it was a tree wobbling and, and, the pheasant got killed!”

“He got killed by hunters”

“I think he fell off the reindeer and hit on gravel”

“Maybe a car drived over it?”

“The car squashed him.”

“The hunter’s car drove over.”

“Why does it have closed eyes?”

“Cause it bumped into a wall.”

“Maybe he bumped against a motorbike.”

“Maybe something squashed it with feet.”

A 4-year-old boy commented, “I wonder if the pheasant bumped into electricity wires and he got electricity shock!” The children expressed an interest in further investigating the dead pheasant and closely examined the eyes, the feathers and the feet. Some children wanted to see what was inside the pheasant and staff and parents supported the children who were keen to investigate this by dissecting the bird with the children. They closely examined the internal organs and one 4-year-old boy was fascinated by the trachea, and on completing a subsequent drawing commented, “I drew something inside the pheasant, it’s like a worm with stripes on it”. Back in the centre the children drew pictures of the pheasant, with many adding details such as feet, feathers and closed eyes. 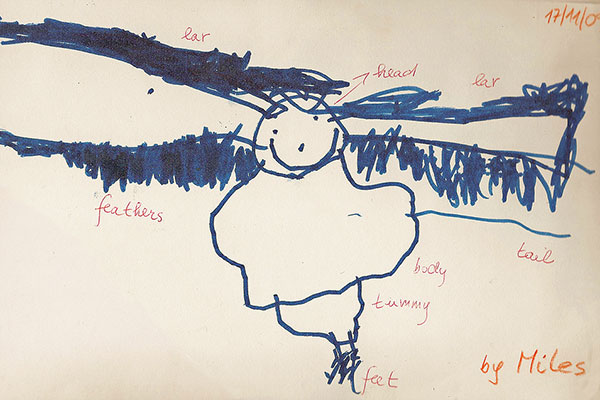 The children went on to select a suitable place in the woods to bury the pheasant and after digging a hole they respectfully buried it. Children will still occasionally refer to the space where they buried the pheasant and wonder aloud when they will be able to dig up the bones to see the skeleton. 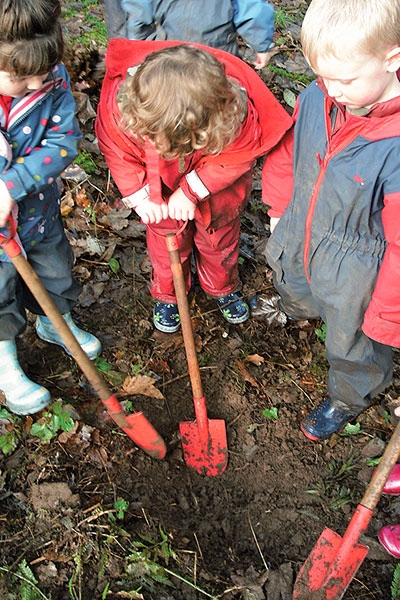 The cycle of nature is an aspect that we often discuss as a group with adults and children. We look at how children use the forest when they are there every day. There was a tendency by the adults to look at the creations the children had made such as a hanging xylophone and consider fixing it, maintaining it for longevity and then we realised that we were fixing it for us, to see something more defined in the forest. So now we leave it and if the string rots we talk about it, if fungus starts growing on it we talk about where it came from, if the system collapses, it is a wonderful opportunity to start again and redesign the space or find music in another way. This concept of curated decay works well in our Nature Pedagogy as it allows us to monitor the safety of the structures whilst allowing children to experience decay and the effects of time on a variety of materials. The disappearance of a den, for example, is noted but not concerning as the children have a sense of when it is time to let it go.

The other aspect we are trying to be mindful of, is whether there are unvoiced cues in the children’s play that trigger the movement of group interest and location for the play. This transience has been of fascination to us as a team, as the wild wood has many paths to many dens both current and abandoned. The dens are monitored for roof collapse but on the whole, they are left for nature to reclaim. Magical moments do happen when small birds come in to shelter, or a deer scrapes a bed in the spaces created by the children. Our pedagogical debate always returns to: “What is it that makes the play move on?”, “How do children collectively appear to make decisions non-verbally?”, “Having at least two role play areas in centres does seem to have a deepening effect on the engagement and storying observed. If children had more indoor and garden space would this expand to five or six as it has in the wood?”

Observable and unobservable phenomena are in the natural world. Children’s connection to the rest of the natural world appears to be heightened in wilder natural spaces that enable the children to follow these unspoken elements and ideas. Children in our nature kindergartens are closely connected to nature, and this includes the cycle of life and death. Different cultures around the world have very different perceptions of death, and the way that they feel about it should be approached. It is taken as a given that each centre will be sensitive to all of these perceptions, and treat people as individuals. >From the experiences we have had, all children need to be supported through the process of understanding unobservable moments such as death, decay and disappearance, and to try to find a place where it sits well within culture and belief.

Dr. Claire Warden has been researching Nature Pedagogy for many years and its creation and theorisation was presented in her doctoral thesis. The inspirational meshwork she founded called the International Association of Nature Pedagogy, seeks to connect nature-based pedagogues around the world.  Her many books are sought after reading for practitioners, lecturers and decision makers globally. They include Nature Kindergartens and Forest Schools, Nurture through Nature, Learning with Nature – Embedding Outdoor Practice and an approach to planning called Talking and Thinking Floorbooks . Find out more about Claire’s work and view her training and resources.